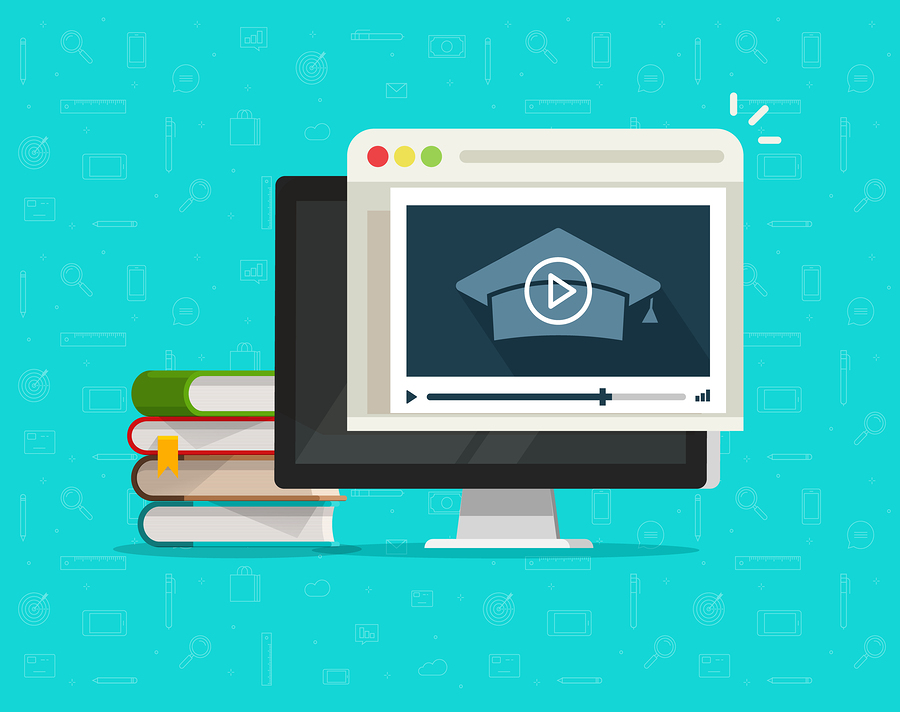 Editor's Note: This is the first of a two-part series on the emerging relationship between job recruiting and digital reskilling / upskilling. Click here for Part II.

For those who don't know, this is a Facebook-Instagram moment for the talent management industry in terms of potential cultural impact.

How is that? Facebook and Instagram were the most well-known, well-funded companies in the social media industry when Instagram CEO Kevin Systrom shook Mark Zuckerberg's hand for $1 billion. Adecco and General Assembly were (and still are) some of the best known companies in their respective industries—each continues to hold its own among the top five in recruiting and digital training respectively—when Adecco acquired General Assembly for under half a billion.

So What's The Big Deal?

To be fair, there are probably more significant differences than similarities between the Facebook-Instagram and Adecco-GA mergers. Those differences can be measured by very different stakes and scales of cultural capital, social capital, and real economic capital (i.e., what each company knows, who they're connected to, and how much equity they possess).

But just as the Facebook-Instagram merger signalled a pinnacle for new connections and potential directions in the world of social media, the Adecco-GA merger signals a pinnacle for new connections and potential directions for the world of talent management. We must recognize, however, that this pinnacle also rests at the top of a talent management industry iceberg—the precarious point at which companies, employees, and recruiters are currently recognizing the immanent need for digital upskilling and reskilling, especially if they're going to help address a huge set of incoming challenges to the human job market and avoid a collision course with technological automation.

Key Takeaways for Why Talent Managers are Investing in Digital Skills Training:

We have known about the demand for digital skills—as well as talent management's potential collision course with automation (more below)—for many years, so why is it only now that job recruiters and job trainers are officially getting on the same page?

Education, recruiting, and training have traditionally been regarded as distinct, distantly related parts of the job placement pipeline. But if companies like Adecco and General Assembly can work together to streamline these processes, they stand a better chance of helping meet demand for digital skills across a lot of job markets in the short term, as well as helping humans avoid a lot of job losses in the long term.

So although it's only one example in the whole wide industry of talent management, the potential synergy of the Adecco-GA merger signals that the industry is approaching being able to sustainably combine these pipelines. It also signals a different set of expectations and directions for the industry. One expectation is that talent management must rise to meet decreased demand for non-digital skills, and its corresponding direction is to face (and meet) increased demand for digital reskilling and upskilling. 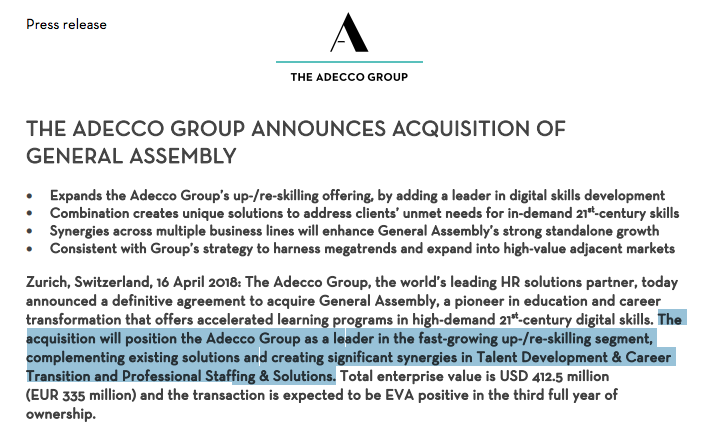 What are reskilling and upskilling?

Both Adecco and General Assembly can satisfy demand for both digital reskilling and upskilling by combining their educational, recruiting, and training pipelines with their customer portfolios— not only so as to maintain their place as industry leaders, but to ensure their clients are the best qualified candidates to fill emerging jobs, and to accomplish that in both the short and long term.

This long term potential is what strikes at the heart of why the Adecco-GA merger is so novel and promising.

Speaking of the long term, there are a lot bigger reasons why top recruiters are investing so much in digital skills now. The biggest of these reasons include, but are not limited to, the following two macroeconomic factors:

In part two of this series, we discuss more of the microeconomic factors that are impacting the recruiting and training practices, as well as how talent managers can mitigate those factors with low-cost investments in reskilling and upskilling for digital marketing.

Visit the Online Marketing Institute to browse over 400 classes in the digital and social media marketing space. 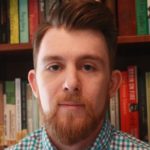 Josh R Jackson is a graduate and former instructor at the University of Arkansas; he taught online writing in the classrooms of the Walton College of Business. Josh's fields of expertise include writing, content marketing and data journalism.