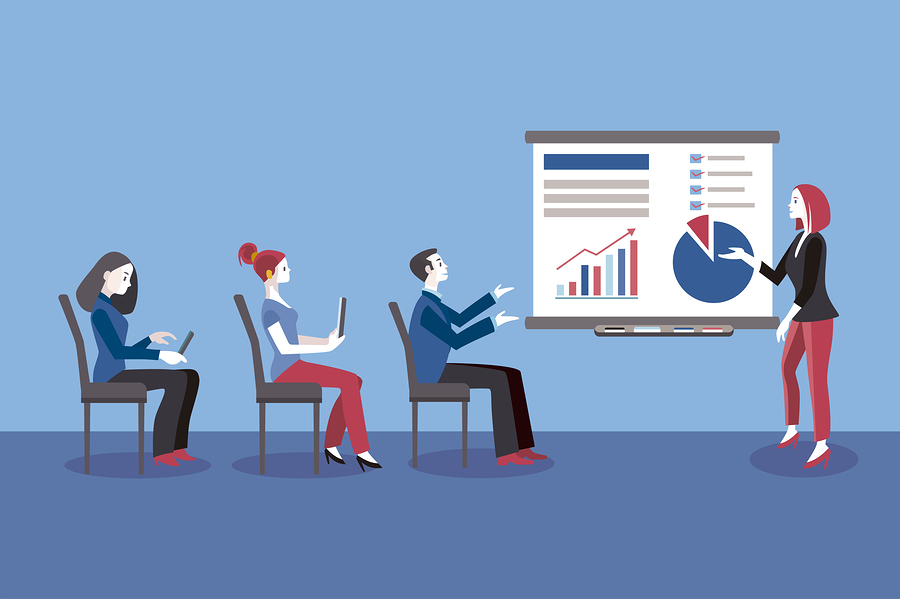 Editor's Note: Josh R Jackson is a contributing editor at BestMarketingDegrees.org. To complement our upcoming webinar with former McDonalds CMO Deborah Wahl, he joins us today to discuss the unique benefits and challenges of becoming a chief marketing officer.

Ask a CMO what role they assume for their company, and you're likely to get a wide range of answers that are highly specific to their company and industry. That's because today's CMO often has responsibilities that span titles as diverse as director of communications and public relations, digital advertising and content strategist, product designer and sales representative, or market research analyst and tech investor. 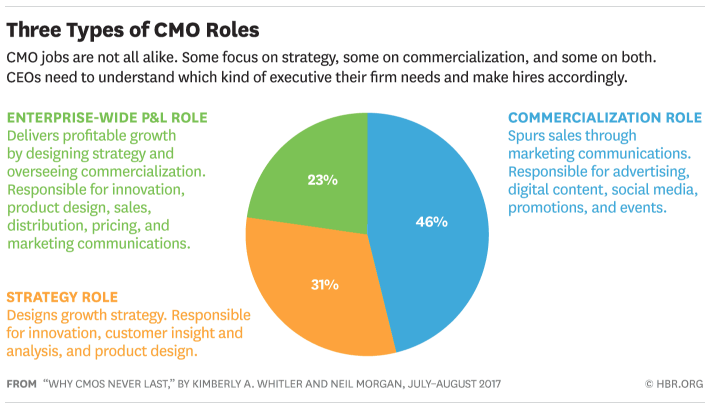 This is not news to most CMOs, whose role, along with the CIO and CTO, is a relatively new (and increasingly popular) addition to the roll titles that regularly comprise a company's C-suite. Their relative newness means they sometimes get saddled with everything and the kitchen sink to test their worthiness as a brand leader.

Which also means that, in order to show they're worth their salt in today's expansive, tech-driven economy, CMOs find themselves taking on a widening range of challenging roles that require an even more challenging set of skills. And although it may be difficult to master that set of skills, assuming that risk can lead to great rewards down the road; because oftentimes, the skills that CMOs master in their demanding roles tend to transfer seamlessly to the role of CEO, rewarding those who take them on with even greater responsibilities.

And this is especially true of CMOs who stay on the job long enough to convince their company that marketing is not a one-job role, or even a one-department role, but a corporate-wide effort that requires buy-in from every member of the C-suite.

So here are the skills that make chief marketing officer the most challenging (and rewarding) role there is.

Multitasking: CMOs Must Manage a Diverse and Growing Range of Responsibilities

Since the CMO's rise to fame and fortune during the era of ad men and ad women—fun fact: the role has experienced more gender parity than other C-Suite role—companies have set the bar higher and higher for their chief marketing officers. As the screengrab below from Mckinsey Quarterly will testify, the CMO has been held increasingly accountable for delivering on promises to contribute not only to their companies' bottom lines but also to company culture. 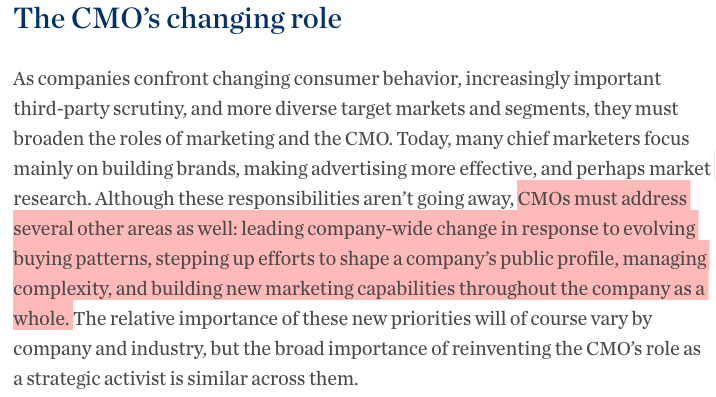 Compounding this burden of accountability is the rate of change that the marketing industry has experienced since the commercial boom and bust of the 1960s - early 2000s.

Over that forty-odd year period, marketing strategists have become less invested in how much airtime or ad space they could occupy in newspaper, magazines, television or radio and much more invested in how they can harness the viral power of digital media channels to spread a cohesive, targeted brand message to customers far and wide.

What this means is that today's CMO has assumed (and is often expected to assume) many of the following responsibilities in addition to the more traditional marketing tasks like advertising, brand management and market research:

Because of pressure to deliver on multiple fronts, today's CMO must be more adept than yesterday's CMO at multitasking and managing expectations. Otherwise, they could lose the job. Which brings us to CMO turnover.

Delivering: CMOs Must Deliver and/or Turnover

The fact of the matter is: turnover rates are high among CMOs. Depending on which  expert, industry or year you ask, they are higher or lower. But statistically speaking, the vast sweep of CMOs are on the job less than four years before they leave for a new one. 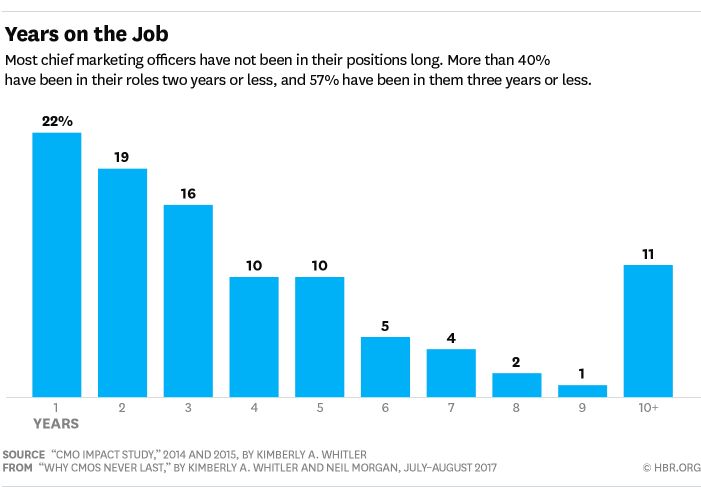 On the negative side, some of it has to do with poorly managed expectations on the part of those who do the hiring. Because members of the C-suite tend to expect CMOs to bite off more than they can chew in terms of growth strategy, marketing technology and product development, it can be difficult for CMOs to live up to their expectations.

On the more positive side, much of it also has to do with upward movement among CMOs to CEO roles across industries. Fun fact: most CMO hires are external rather than internal.

In order to avoid such high turnover, CMOs need to hone their skills and experience to become the successful growth officers, product developers and strategic investors that C-suites need.

Spending: CMOs Must Make Bigger Spending Decisions Than They Used to

Largely due to the rise of spending on digital marketing strategies, marketing budgets have experienced consistent and positive growth for at least 8 years.

The CMO Survey of nearly 400 chief marketing officers in 2017 showed that CMOs expected marketing budgets to increase by over 50% into 2018. 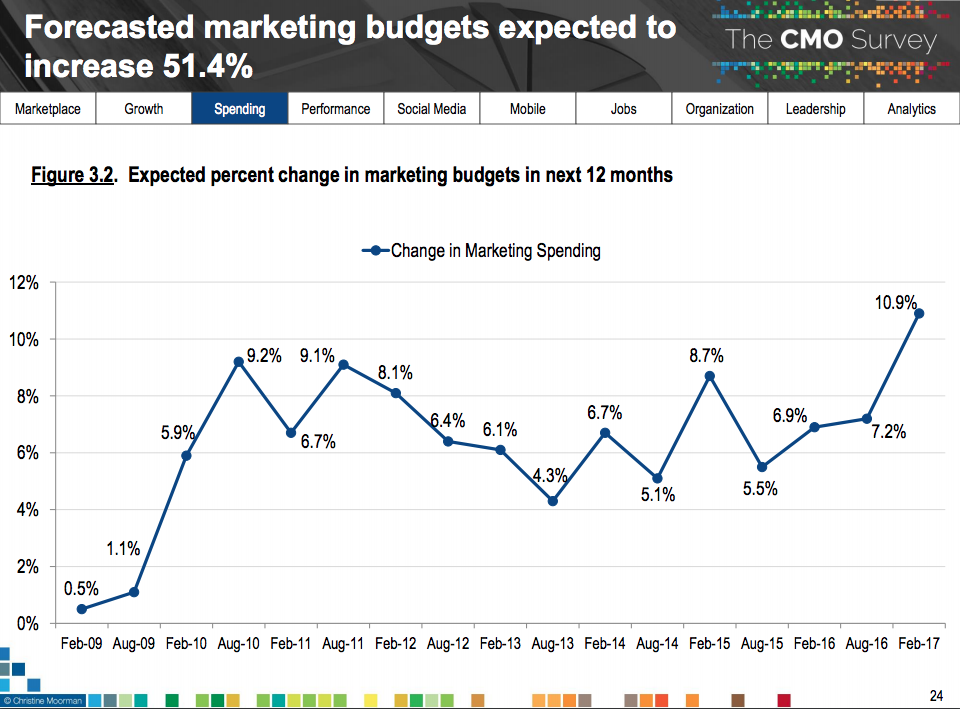 Because marketing technology has changed the game, and it has given CMOs a platform to enter a league of their own.

In fact, digital marketing technology has changed the game so thoroughly that CEOs and CFOs are relying more heavily on CMOs to invest the time and money it takes not only to research and develop new target markets, but also to launch their own brand's technology, as well as their brand's own technology investment strategy.

Ten years ago, such a significant investment strategy would likely have fallen to the CFO, CIO or CTO. But in a sign of the times just last year, Gartner predicted CMO spending on marketing-related technology would outstrip that of the CIO in 2017. 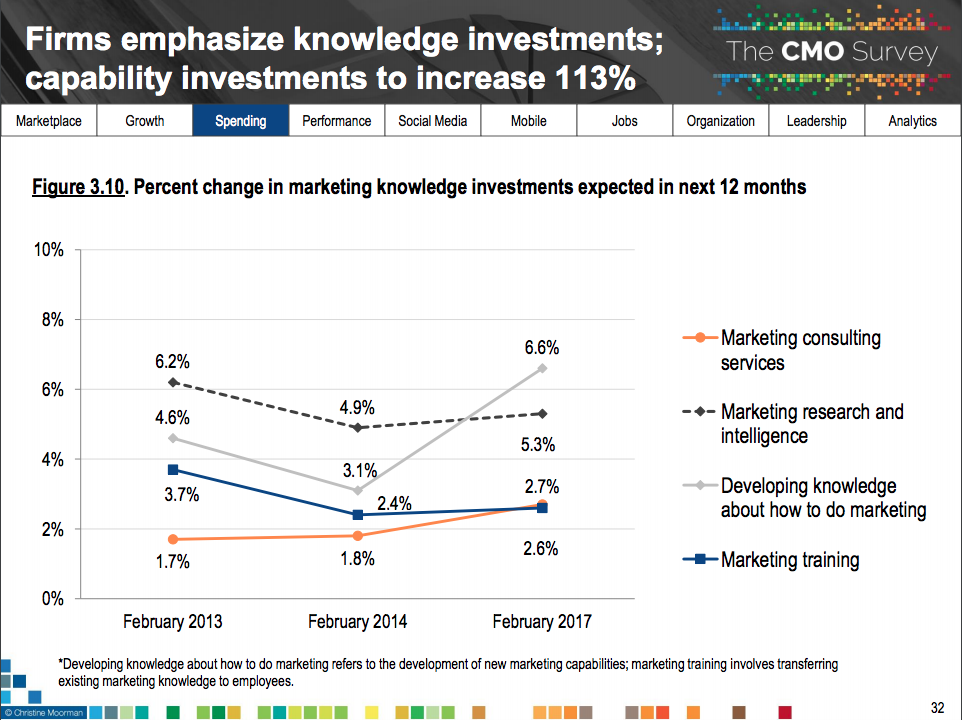 Although the numbers are still out on whether the Gartner prediction came true last year, a four-year trend of CMOs spending most of their budgets on marketing research and intelligence—which often involves spending on new technology to conduct that research and measure that intelligence—suggests that we have entered a new era where the prospect of gaining actionable marketing insights is worth the time and money.

And the fact that developing knowledge about how to do marketing has more than doubled as a spending priority between 2014 and 2017 corroborates this suggestion.

So yes, chief marketing officer is no longer a one-job role, a one-department role, or even a one-strategy role. It is a corporate-wide effort that requires buy-in from every member of the C-suite.

It also happens to be one of the most challenging (and rewarding) roles there is.

Want to know how you can think like a CMO? Learn from the best in the business! Former McDonalds CMO Deborah Wahls will join us in a FREE webinar to discuss key elements that a CMO must master to create value for their organization