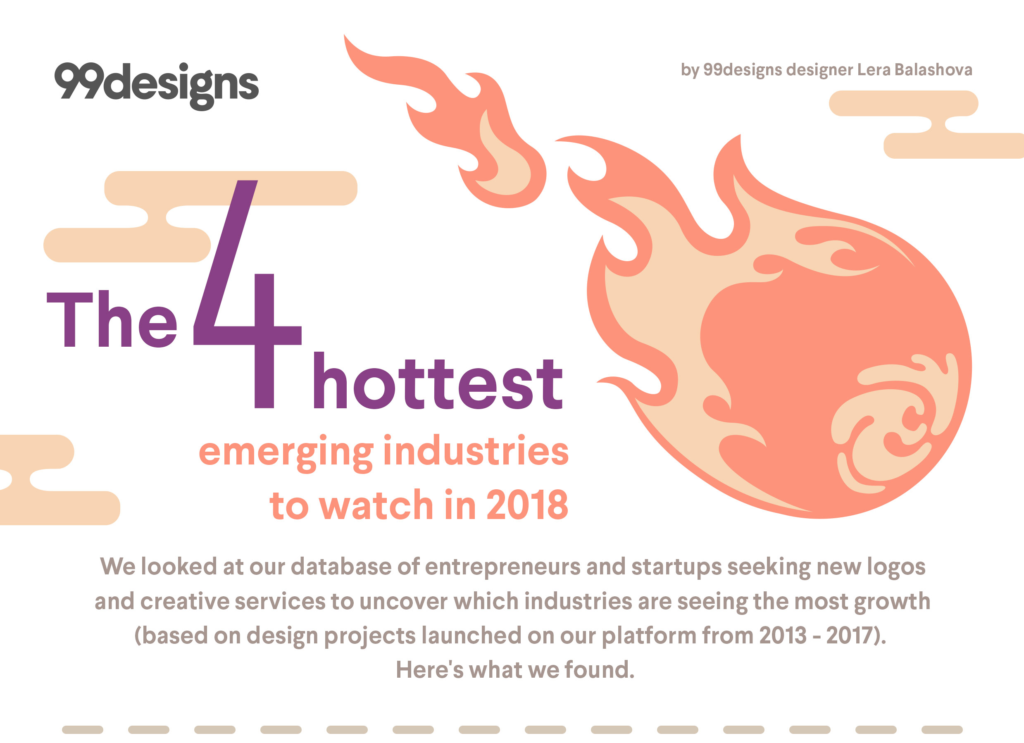 Virtual reality, cryptocurrency, cannabis, and "alternative travel" — sound familiar? They may sound like nothing more than industry buzzwords, but there’s data to explain why many entrepreneurs are capitalizing on growth of these burgeoning new sectors.

CMO at 99designs Pamela Webber weighs in on the analysis -

"Escapism seems to be a central theme running through the types of businesses that have skyrocketed on our platform in the past two years. In what many have seen as a tough year for natural disasters, tragedies, and political strife, it may not come as a surprise that businesses offering consumers a break from daily life…  or even a financial ‘plan B’ seem to be thriving."

If you’re planning to start or expand an existing business this year, these are four industries you want to keep an eye on. Here's the data to back it up -

Cryptocurrency is the word on everybody’s lips. It is hardly possible to read the news without Bitcoin or Ethereum cropping up, bringing to boil all manner of industry speculation, public interest, and even policy. 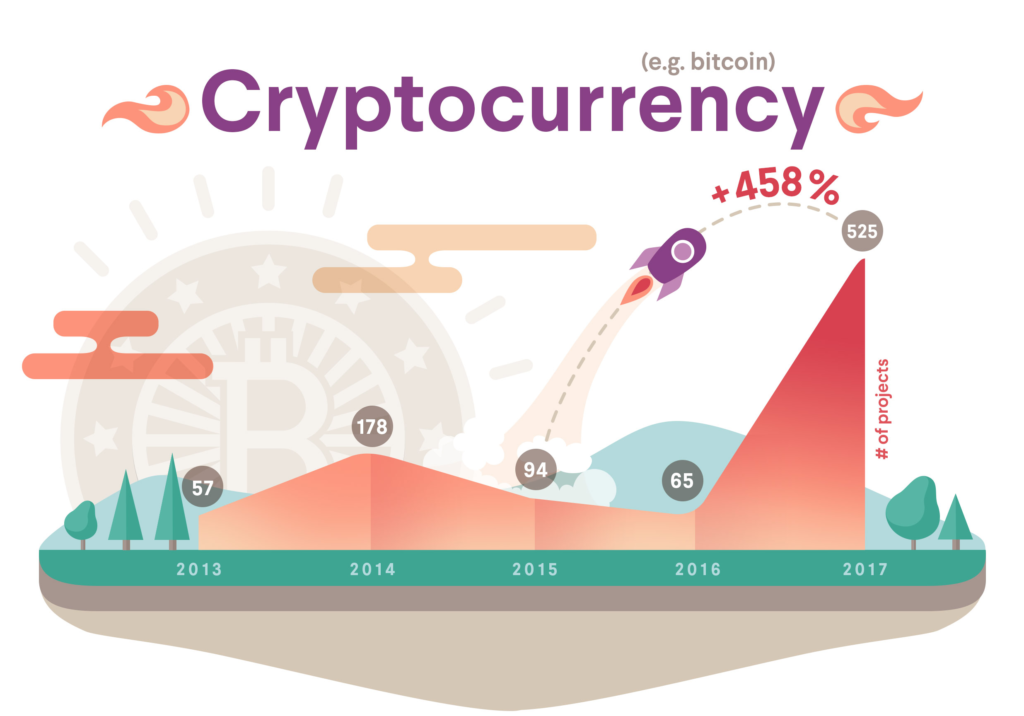 Although cryptocurrencies have been around for years, they’re just now becoming household names and entrepreneurs are quickly hopping on board. Projects with the term “cryptocurrency” have seen a 458% increase since 2015 and a staggering 821% increase over the last four years. This explosive growth is hard to ignore at face value, but it’s all the more interesting to see where this growth is concentrated. 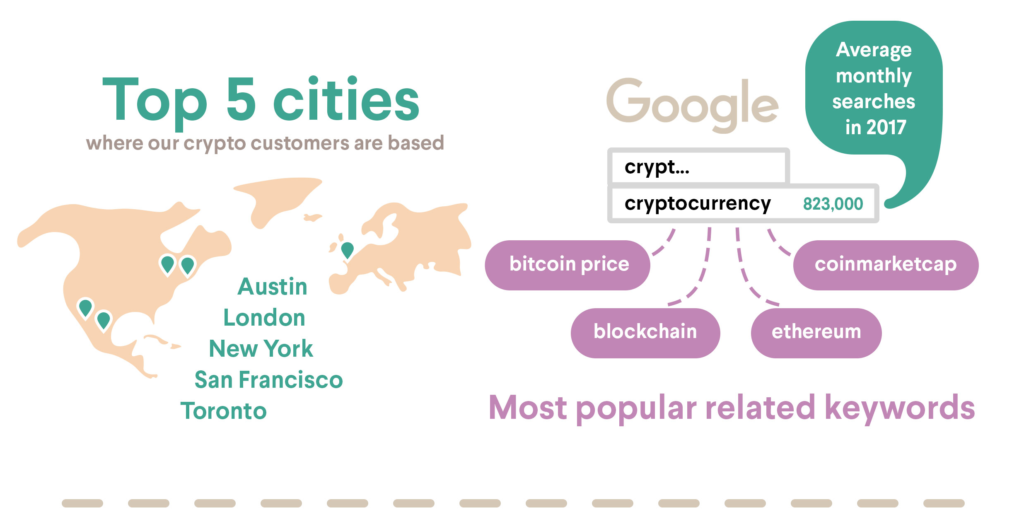 While New York and San Francisco take the global lead, London leads the European charge, coming in close third. While the DACH region has strong representation generally (with Switzerland being home to Crypto-Valley and a global leader in FinTech), Berlin and Paris trail London in second and third within Europe.

More than half of all U.S states have now legalized marijuana either recreationally or medically. This recent wave of legalization has created a massive industry that is still very much in its infancy, an opportunity for many start-ups to shape industrial growth and to carve a place for themselves as policy continues to develop. 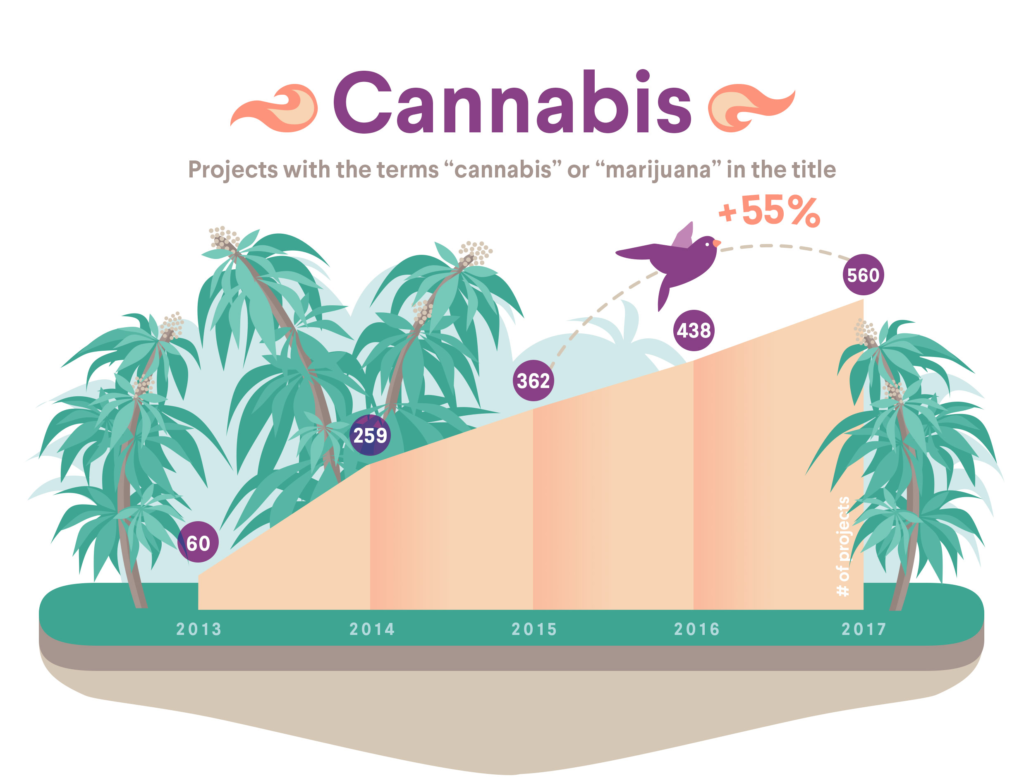 Projects with the terms “cannabis” or “marijuana” in the title have increased 55% in the past two years and an impressive 833% since 2013.

Los Angeles leads this drive, followed by Portland. This stands to reason, considering that they are the largest two cities of the first two states to legalise medical marijuana. It may also come as no surprise that Denver comes third in the rankings, as the capital of the first state to legalise recreational marijuana. 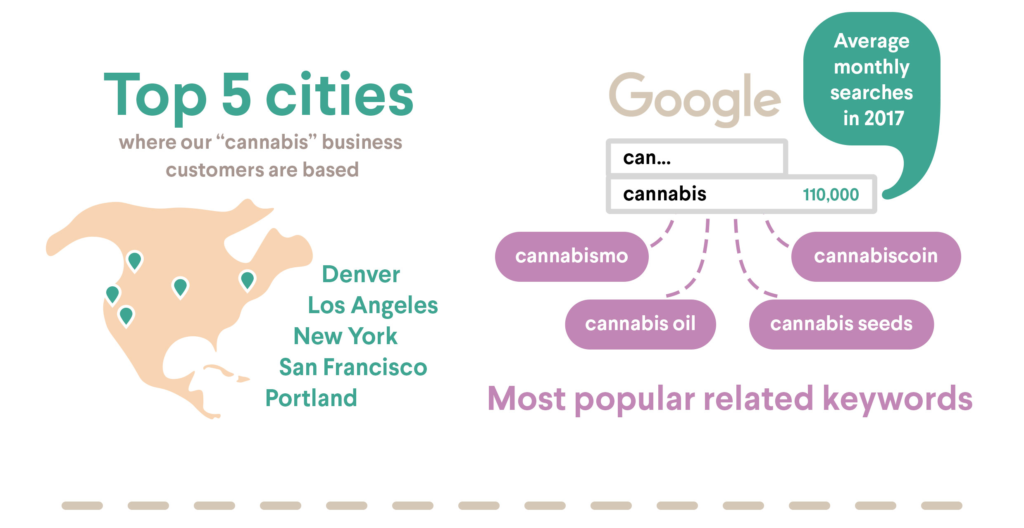 Though the U.S takes an unsurprising lead when it comes to cannabis, Vancouver and Toronto also made the list, coming in at ninth and tenth respectively. While the U.S and Canada are not the only countries taking aim at re-classifying cannabis, North America finds itself at the epicenter of this evolving industry.

Entrepreneurs are setting their sights on the traditional travel industry. With the rise of Airbnb, voluntourism, boutique hotels, and a renewed interest in RVs and campers, staying at a hotel is no longer the main viable option. 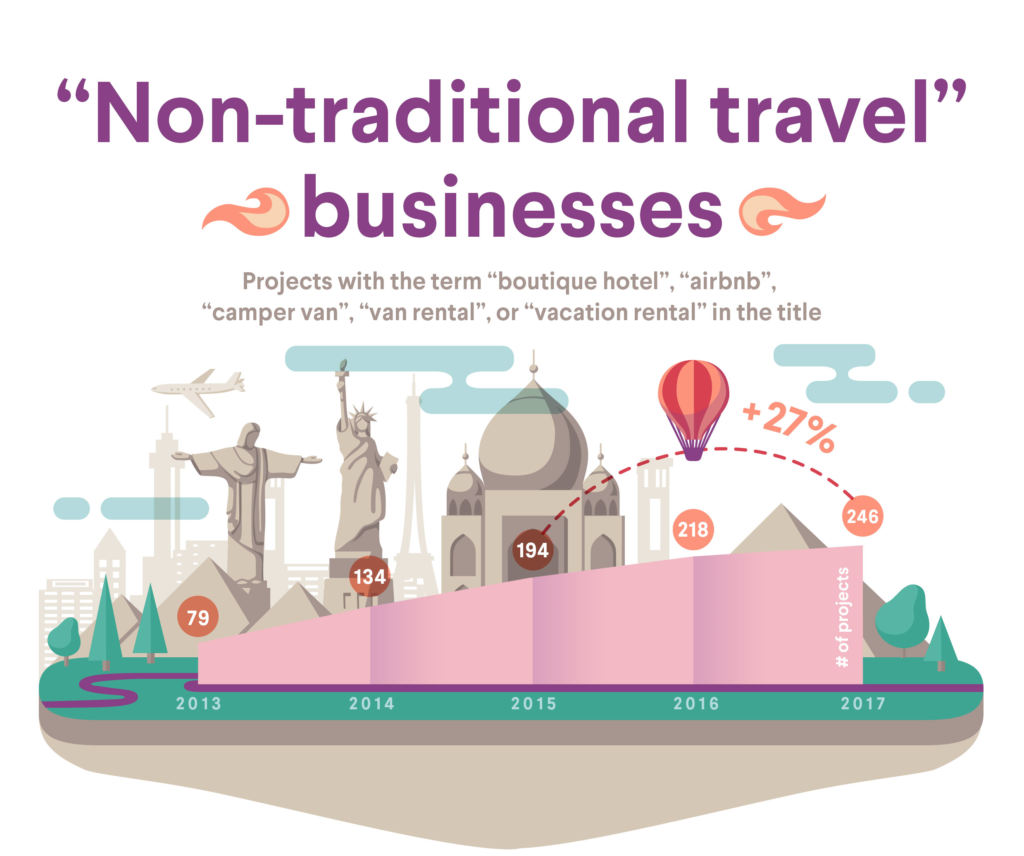 This trend towards a more personalised travel experience is lead globally by San Francisco, Austin, and London — the cities with the highest concentration of alternative travel start-ups. Though London again tops the European start-up scene (followed by Berlin in second and Paris in third), we also see Bristol coming in fifth, reflecting Bristol’s creative spirit and proximity to coast, city, and country.

The VR industry continues to pique the interest of entrepreneurial minds, as projects with the terms "augmented reality" or "virtual reality" come in at 38% over data from 2015 and 514% over 2013. 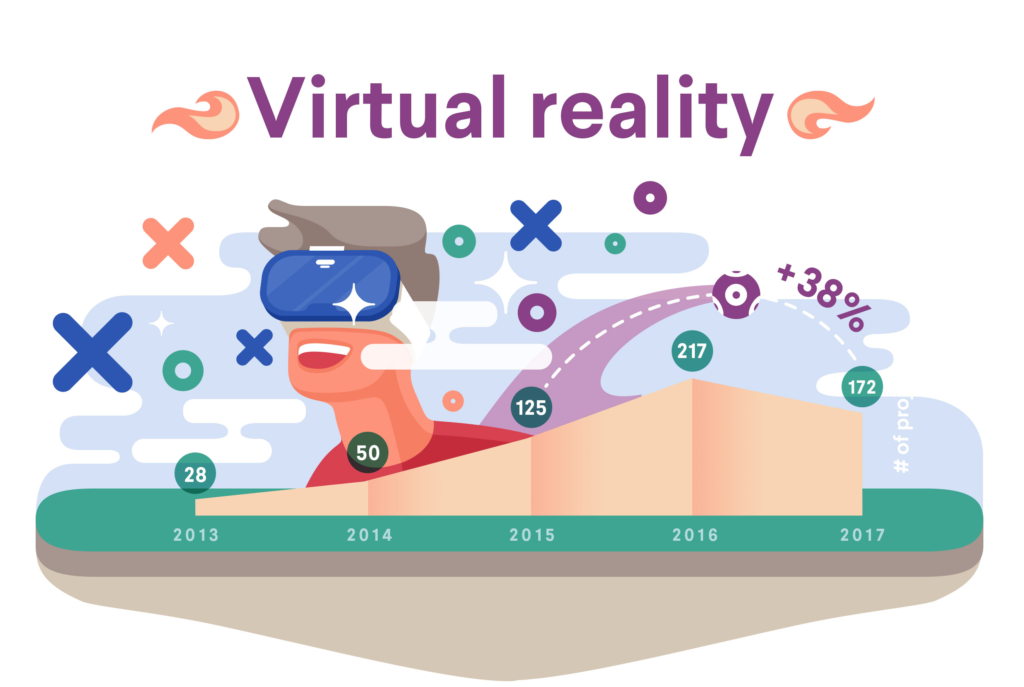 Notwithstanding its critics, virtual reality maintains strong growth globally as technological innovations continue to pave the way for practical application across various industries, encouraged by forecasts of the global market size reaching 215 billion U.S dollars by 2021. 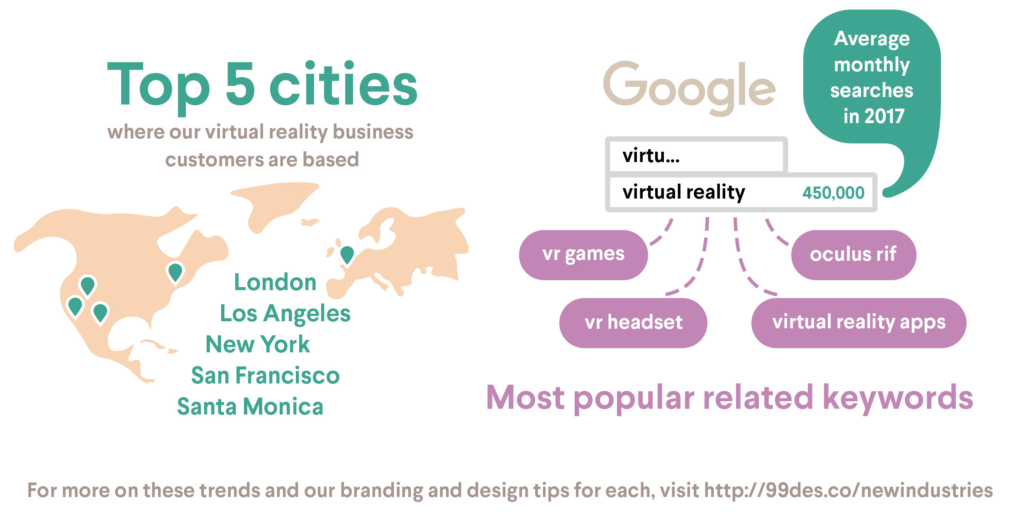 Leading the global pack we have San Francisco, Los Angeles, and London. Zurich and Berlin trail London in second and third within Europe and Leeds takes 6th, putting the UK squarely on the map as a global leader within the industry.

To learn more about blockchain and cryptocurrencies, join us for a free webinar with early Bitcoin adopter and marketing expert Jeremy Epstein on March 27th at 12 PM PST / 3 PM EST 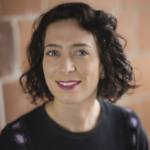 Laura heads up the European Marketing team for 99designs in Berlin.